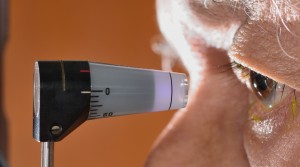 The vitreous is the clear gel-like substance that fills the inside of the eye. With age, the vitreous gradually liquefies. At some point in most people’s lives, usually after the age of 50, the vitreous collapses due to lack of structural support and falls away from the retina, which is the tissue that lines the back of the eye.

WHAT ARE THE SYMPTOMS OF POSTERIOR VITREOUS DETACHMENT?

The most common symptoms of vitreous detachment include a sudden onset of “floaters” in the vision. These are often described as black spots or “cobwebs” that float through the visual field, especially with eye movements. These are due to solid pieces of the vitreous gel floating in the now liquid vitreous and casting shadows on the retina. Flashing lights like lightning bolts or camera flashes are also commonly experienced due to the vitreous pulling on the retina as it is collapsing. Infrequently, the vision can become significantly blurry due to a broken blood vessel in the retina from the pulling of the vitreous. Often, people are asymptomatic altogether.

WHAT ARE THE RISKS OF POSTERIOR VITREOUS DETACHMENT?

In a small percentage of people, when the vitreous collapses, it can pull on the retina and cause a retinal tear or hole. Once this occurs, the now-liquid vitreous can leak through the break and cause the retina to separate from the back of the eye, which is called a retinal detachment. You should have an eye examination if symptoms of PVD are noted to rule out the presence of a retinal tear.

WHAT SHOULD I LOOK OUT FOR AFTER I HAVE HAD MY EYES EXAMINED?

Once you have had a complete eye examination it is still important to be aware of some important symptoms. These include:

If you notice any of the above symptoms, contact Dr. Walker’s office as soon as possible.